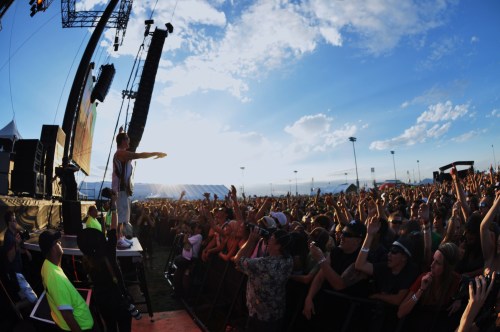 Slightly Stoopid has built a long career out of being independent and calling their own shots. They are influenced by various types of music and it shows in every single album they have released. Slightly Stoopid began their careers at the ages of 15 and have grown, matured, and played the way the wanted to play for the last 16 years. I caught up with the band’s drummer Rymo to see how they have been able to keep themselves independent and what that means to them as artists.

Q.) I see you guys are very savvy with promoting your music via the internet, how has the internet played into your success?

A.) “It’s been huge! It’s actually been one of our main PR tools. It’s been a blessing for us. When a lot of people were screaming about the crimes of Napster, I think bands that based their living on touring were actually grateful for it because it was spreading their music all around to a ton of new fans, who, maybe weren’t going to buy their record but would go to the show. So, a band like us, who is able to make our living touring, based on the fact that we sell hard tickets. I mean, we’ve never really gone platinum; we never really sold that many records. So for us the internet has been a positive tool and it’s been a way for us to create a following and keep our fans notified of events, special give a ways and things like that. As well as putting up new songs, selling music, and selling merch. So it’s been huge in every way for us.”

Q.) What do you find to be one of you most effective marketing tools other than your music?

A.) “That’s a good question. I suppose merchandise. We do put a lot into our recordings and we always will. But, the fact is, if people are giving your stuff away for free and if you go into a million dollars worth of debt trying to record an amazing album. Yeah! It’s going to sound great but if you don’t sell a million copies, you’re never going to recoup that money. So for us the focus has been staying on the road and utilizing one of our main marketing tools which is selling merch. When we do our own dates, we call the shots. We sell CDs sometimes for five bucks because we want the kids to the check out the hard CD with the artwork, the liner notes, and pictures. So, I would say merch is one of our largest marketing tools.”

Q.) Your music has evolved from your first album to the most recent, is that something you try to concentrate on doing or do you just let your music grow organically?

A.) “I mean we are human beings and we are maturing. When we released our first album, we were 16, 17 years old. We are now in our mid 30’s, almost a half life time later. We have all grown as human beings and done a lot of other listening. At that point our music reflects what the guys were listening to in terms of NOFX, Operation Ivy, Rancid and all that stuff. So the music comes out a lot like that because that’s what the guys were listening to. Over the last several years I think our listening has become so much broader. Honestly, we have all gone through different sort of musical phases as individuals, you know everything from Iron Maiden, to Beethoven, to Bob, to Barrington Levy, to Damian, to all these different types of artists that I can’t even begin to touch base on. I think our listening has become more broad as individuals and I think now when we step into a room together, we go that’s a funky bass line, well let’s throw some real funk behind it because we listen to Herbie Hancock, we listen to Parliament Funkadelic, we listen to the Chili Peppers or if it’s something on the roots angle let’s kick up a Toots and The Maytals vibe or one of these artists that’s an old school classic like the Mighty Diamonds. So, the fact that we have sort of that ability to look back and go, yeah this is sort of a jazzy thing, well let’s throw in like a jazz vibe on this section and let’s bring it back to a reggae thing, and in the next section let’s go into a Fishbone mode and then into a hard Ska. Having listened over so many years and been touring for 15, 16, years it’s all relative. I mean we are maturing as humans and so it’s a natural progression for our music to mature.”

Q.) What’s the one thing you want your fans to take away from a Slightly Stupid Show?

A.) “Honestly man, we just want to have a good time! Our music and the band is all about partying. We drink every single night, we smoke every single night and so we want to bring that fun element because that’s the way we grew up. We grew up on the beach surfing, skateboarding, you know smoking joints and whatever, just having fun. Not taking things so seriously. We want people to come out to our show and have a good time. Check your fears and concerns in at the door. Have some drinks, get in the mosh pit, or sit in the back, smoke a joint, cuddle up with your girl and bounce to some reggae. That’s what it’s all about.”

Q.) What are some pieces of advice you would give to up and coming bands to help the spread of their music to new fans around the country and world?

A.) I would say honestly there is no real shortcut the way we did it. We have been on the road for a solid 15 years and it’s been a real slow and steady climb. The first time we would go into venues, there would be the bouncer, the bartender and a couple waiters. The second time we would come around maybe they would call 10 friends. Then exponentially 10 turns into 50 and 50 turns into a 100. So for the up and coming kids, I would say, don’t change who you are, don’t jump on whatever band wagon, play your music now and play your music 5 years from now and keep it in your own evolutionary state. With that, work as much as possible, play every gig, play the middle school bake sale and if you get a chance, play some bigger gigs. It will only make you a better player. You have to play your ass off every time, whether you are playing in front of 50 people or 50,000. So for the kids, get out and work, do your best, play your part, and stay focused on what you want to do.”

Q.) Are you signed to a major label or are you independent?

A.) “We have our own record label now, it’s called Stoopid Records. In terms of ownership, we own all our masters now. We’ve worked with a couple labels over the years but nothing more than a one record release and then contracts void after that. We have been able to maintain our own musical identity because we are calling our own shots. By doing that, it’s been a harder road for sure but it’s also been a more legit and honest road.”

Thank You Very Much for the Time Rymo.

Interviewed by Jimmy Iles – Beat-Play Director of Operations and Photo-Journalist for the Examiner.com. For more pics of Slightly Stoopid go to the world of Jimmy Iles