Listen up.  You’re about to get a history lesson.  Carolina Chocolate Drops hail from the Asheville, North Carolina area.  Their music is based in the great traditions of black american folk music.  If you have a set of spoons or a jug feel free to play along…

I had a chance to see the Chocolate Drops a few years ago at the Newport Folk Festival in Rhode Island.  They were billed to play the smallest stage.  Big mistake concert promoters and schedule makers.  From a distance I honestly thought there was a riot going on in that tent at one in the afternoon.  Upon further investigation I realized people were just getting down and dirty with some good ole’ fashion “dirt floor dance electricity.”(Rolling Stone)  Long story short a main stage act cancelled later that day and the Drops were chosen to fill the main stage spot.  I still wonder to this day how they went from throwing a relatively small party for a few hundred fans lucky enough to squeeze into their tent and then do the same thing not 3 hours later to a crowd of 10,000 grabbing each and every stoned attention span (The Allman Brothers were the headliners).  I think the only explanation is talent.  They have a very genuine vibe and likability.  This positivity is what drives their full length offering “Genuine Negro Jig.” 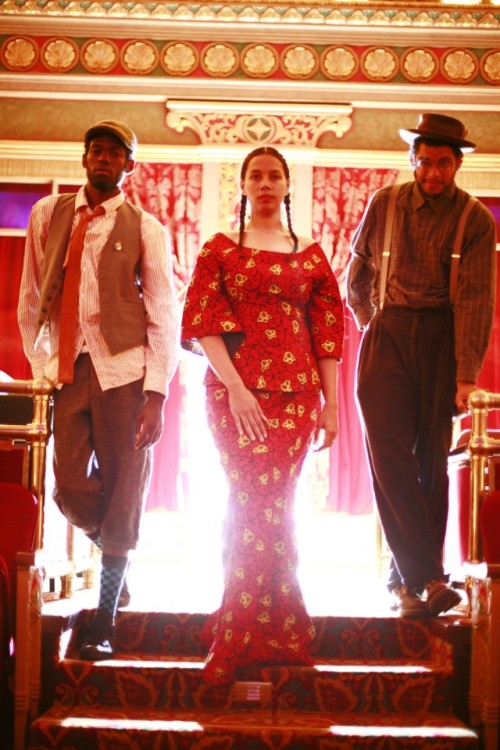 They shared the stage with Taj Mahal, and traveled to Europe… and joined Garrison Keiler on Prairie Home Companion.  In 2008, they received an invitation to play on the Grand Ole Opry. “The Drops were the first black string band to play the Opry”… –Band Bio

“Genuine Negro Jig” features some select albeit ballsy covers as well.  “Trampled Rose” by Tom Waits is featured toward the end of the record and “Hit Em’ Up Style” by Blu Cantrell anchors the first half of the CD and the live performances.  Two completely different artists with completely different styles of music and ranges each given the same stripped down treatment only the Drops can provide.

These songs if anything are out of complete respect for the old style and old school and I’m not talking about 80’s and early 90’s hip hop.  You can close your eyes and hear the songs on this record being sung around a campfires.  It’s the simplicity and clean sounding strings and organic rhythms that make this music interesting.

I totally understand that this music isn’t for everyone.  I also think that wether you like it or not you need to give it a chance just for history’s sake.  You can be a music snob, I know I am sometimes,  but as a music fan this music needs to be acknowledged.  This band is important because they are breathing new life into a now ancient art of acoustic traditionals  born out of the South.  “Genuine Negro Jig” is a tribute to what once was and yet still is because bands like Carolina Chocolate Drops exist and keep it alive.

They are currently on tour and TRUST ME you want to be there when they dance through your town.  You don’t want to be stuck in the cloud of dust they are going to leave behind.  Tour dates are HERE.  You can buy “Genuine Negro Jig” HERE.  As usual here is the last track off the record.