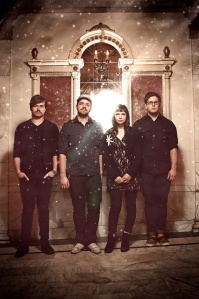 Belle Histoire is a new indie-pop alternative band from Covington, KY that’s been getting a lot of attention for their music in a brief amount of time.  The band consists of Jane Smith (vocals, keys), Aaron Hunt (guitar, keys, vocals), Austin Livingood (guitar/vocals), Mitch Winsett (bass, vocals), and Wes Comer (drums).  Their new original music has sparked interest in many new fans from their hometown of Cincinnati and Nashville, TN.  They have just released a debut EP on iTunes called “Spirits.”  Check out this song from their EP called “Nightmares.”

My friend Chrissy attended their show in Nashville on July 25.  “I was able to see Belle Histoire at the Hard Rock Cafe in downtown Nashville last week.  I went to the show without any pre-conceived opinions of the band and was pleasantly surprised!  The 5-piece group began their set with poise and maturity kicking off the show not with a timid “hello” into the microphone but with a powerful combustion of sound as they began their first song with confidence and excitement.  From the first note to the last, their songs were intriguingly eerie, and their performance, captivating.  Also to be noted was the vocal performance and stage presence of front woman Jane Smith.  Her voice is honest and pure and her presence on stage is of confidence and expression!  Being only 17, her maturity in these areas is, in my opinion, beyond her years!”  From getting the opportunity to spend time with Belle Histoire after the show, she soon learned that their personalities were just as pleasant as their music.  It’s no wonder that this band is acquiring so many fans in so little time.

Belle Histoire has shared the stage with Cold War Kids, Parachute, Ted Leo and the Pharmacists, I Can Make a Mess Like Nobody’s Business, Aaron Gillespie, Jarrod Gorbel, MANSIONS, and many more.  They will be playing a show with the Cold War Kids tomorrow night in Covington, KY at the Madison Theater.  If you are in the area, it would be a great show not to miss!  If you can’t make this show, check them out here.

1,2,3 is the brainchild of Nic Snyder and Josh Sickels, two friends from Pittsburgh, PA, who recently released there debut full-length album entitled New Haven in June. Aside from the logistical nightmare that is attempting to Google search “1,2,3,” my first experience with this group was extremely positive. After listening to samples that are posted on their myspace page, I became more enamored with their creativity and their ability to create so many different sounds, often within the framework of a single song. One benefit of this creativity is that the listener is never truly able to stereotype this band and any attempts to pigeonhole 1,2,3 into a specific category or compare them to others is quickly defeated when the next track plays.

Set in the quintessential blue-collar city of Pittsburgh, PA, “Work” is somewhat of a laborer’s anthem. Check out the video below and head over to their myspace page to hear more samples. As aforementioned, New Haven, their latest album hit the markets in June and its one of my favorite of the year thus far.