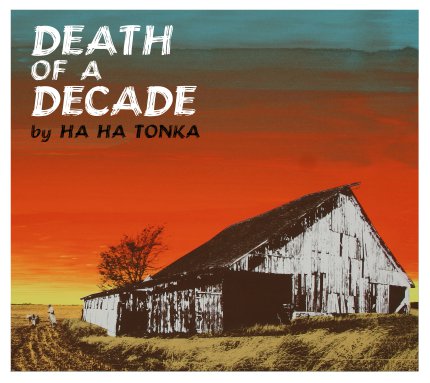 Happy August peeps.  I just realized today summer time is basically over.  I feel like it just friggin’ started, but whatever.  Spent the weekend in 50 degree San Francisco “seriously get your act together it should be hot out not hat and scarf weather” temperatures.  Completely ridiculous.  Anyway I was thinking about getting myself back in the summer mood.  A good friend from home sent me a message and a band to check out.  They are called Ha Ha Tonka.  Obviously the name gets your right away, but I was weary of the music.  From the sound of the name it seemed as though they were trying a little to hard.  I cued up the first track and man was I wrong.  This is Ha Ha Tonka and their new record “Death of a Decade.”

Indie rock meets country (not really, but a little), meets good ole’ fashion mountain music.  This is a pretty exciting band taking elements from two completely different genres and blending them perfectly.  The vocals are great as are the acoustic mandolin mixed with the guitars and  the gritty vocals.  It’s easy summertime listening.  They fall in that Blitzen Trapper and Dr. Dog realm of bands who are using country elements in their music to create awesome acoustic indie rock or as their fans like to say “foot stompin’ indie rock.”  I concur.

Originally from Missouri these guys are rooted in the Ozark tradition of mountain music.  I love their sound.  I fact I just got this record today, burned to a CD (I know right) and popped it in my car so I could listen while sitting in the dismal black hole that is the 101 freeway.

The music brightened my day and when I closed my eyes and took a deep breath of my 99 cent evergreen airfreshener I kinda maybe sorta thought I was with them up in the mountains having a good ole time.  After I exchanged information with the driver I rear-ended I was sadly drawn back to reality, but at least I still had the tunes.

“Death of a Decade” is a great piece of americana.  It has all the great elements of a hit record.  Yes their genre might not be for everyone but I dare you to give it a listen and not like it.  It’s feel good guitar music with the twang of the south and the harmonies of the indie rockers we all know and love.  I think I can honestly say I’m now a fan of this band and when they come around LA I’ll be there with bells on.  They are currently touring the midwest and parts of the south/ northeast.  Tour dates page is located HERE.  You can buy “Death of  a Decade” HERE.  Join the mailing list.  Follow on facebook.  If your looking for some good old fashion music with an indie rock twist I think you have just found your band.  This music is for the hillbilly wearong Ray Ban shades and skinny jeans in all of us.  Here’s a rockin’ song I forgot to post earlier called “Made an Example Of” and  the last track, “The Humorist”, from Ha Ha Tonka’s “Death of a Decade.”

Made Example Of – Ha Ha Tonka

This entry was posted in Independent Music. Bookmark the permalink.