Filthy Children Live at Cervantes’ Other Side, Denver, CO [Photos]

Filthy Children Live at Cervantes’ Other Side, Denver, CO

The Man Whom – The Greatest Event [NEW MUSIC]

The Man Whom is the moniker for Wexford-based singer songwriter, producer/composer and multi-instrumentalist Ian Doyle. The Greatest Event is his debut Album. With the help of musicians and friends, Brian Hassett (bass), Christian Best (drums), Doyle and his band retreated to the seclusion of a house in Kilrane Village and worked intensely to record the majority of the album. The piano parts were …subsequently recorded in the local arts centre.

Further contributions to Doyle’s album include polished string arrangements written by composer Peter Fahey and performed by the Mamisa Quartet, as well as local guitarist Clive Barnes who played peddle steel for the current single Over and Under.

For the finishing touches, Doyle went to Exchequer Studios, Dublin with producer Brian Crosby and mixing engineer Phil Hayes who shaped and honed the original recordings. The result is an album which is the sum of its parts, held together by a shoestring and interwoven with the goodwill of creative, talented friends.

WHAT OTHERS HAVE SAID :

Sing Till There’s No Songs Left’ features emotive harmonies, uplifting brass, and swagger in spades. ‘Over And Under’ brims with good vibes, while ‘Leavin This Town’, with its unsettling melancholy, is a handsome tune with a lyrical edge that makes it relevant to these forlorn times. The string-tinged and choral ‘Easier To Run’ is almost illegally heart-breaking, while the restrained ‘Call All The People’ climbs with uncanny power, with Doyle taking it to higher and higher levels of elation. ‘Puppeteers’ is a long-held favourite of mine and ‘Til It’s Gone’ wraps it all up so you want to start all over again. The Greatest Event has enough charm and inventiveness to fill your head and nourish your soul. Eat it.

The Sunday Times ****
A slick production with accomplished musicians, elaborate scores and scrupulous string arrangements. Call all the People has the heartfelt passion of an anthem, including melodic bursts of melancholia, while Sing Till There’s No Songs Left, I know your Face, and Over and Under, the current single, strike all the right chords.

News of the World on Sunday ****
This debut album from Wexford man Ian Doyle takes the joyousness of Sufjan Stephens and the unusual phrasing of Villagers, filtering those elements into an eventful listen.

The Irish Times***
“New name, fresh approach, adventurous songwriter: that’s Wexford’s The Man Whom (aka Ian Doyle) for you. Songs such as I Know Your Face and The Man Who Knew Too Much display Doyle’s nifty craftsman- like process, while Call All the People and Autopilot highlight a working knowledge of the kind of music and musings that have gained him comparisons to Villagers and Neil Young. Out of the blue, then – another new, good Irish singer-songwriter”.

for more check out http://www.themanwhom.com 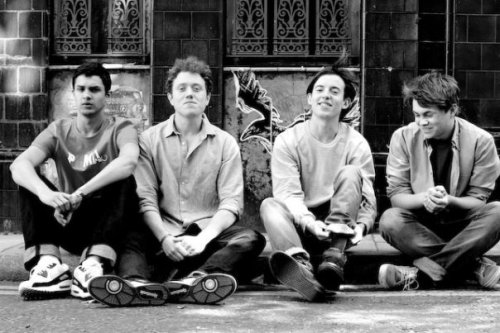 Bombay Bicycle Club is an indie-rock band from London.  Comprised of Jack Steadman (lead vocals, guitar), Jamie MacColl (guitar), Ed Nash (bass) and Suren de Saram (drums), the band just released their third studio album, A Different Kind of Fix.  The first single released, Shuffle, provides a microcosm of the album’s feel. Building a gentle, hooky pop song over a looping, dance-inducing piano sample, it’s, like all the best late summer sounds, seventy-five percent exuberant and twenty-five percent melancholy.  This album is different than the previous two; it incorporates more electronics and has less folk influences.  Watch the video for Shuffle to see for yourself, or see them live in Brooklyn (Music Hall of Williamsburg – Sept. 7) or Philadelphia (Theater of the Living Arts – Sept. 9) – for more tour dates check out their schedule!

I said goodbye to Nashville last week for a little vacation in Sarasota, FL.  However, my music and ambassador senses were still fully intact, keeping an ear out and listening for any interesting new music that might come my way.  This has been a long weekend of afternoons on the beach, and dinners by moonlight.  You will almost always hear live music playing if you eat out for a couple meals in this town.  Whether it’s lunch at Clearwater beach, dinner in St. Armonds, or a night on the town in the Village, you’re going to see some performers.  This is when we came across a hidden gem amidst the typical beach bars of the town.  After dinner one night, we decided to have a drink at Ceviche Tapas Bar & Grill and boy were we pleasantly surprised.

Contemporary flamenco music filled the air and we were thoroughly entertained by a reggae flamenco band called Cabal.  Because of the Spanish tapas atmosphere, Cabal was in flamenco mode, and it was awesome.  Ever since visiting Spain last summer, I have really enjoyed and appreciated flamenco music, especially the guitarists. The skill level is far above your typical rock guitarists, and the feel is so precise, but also natural.  Every member of Cabal is an excellent musician and the fact that they are able to play flamenco music so well proves it.  “Individually, the band members have achieved an abundance of diverse experiences and accolades, including: Cordoba Guitar Company endorsements; a 4 star review in Modern Drummer magazine; performances with Santana, Willie Royal of Willie and Lobo, Greg Osby, and Christina Aguilera among others; tours in Western Europe, Latin America, and North America; and numerous CD recordings.”  Cabal has been able to combine their individual experiences to create a truly excellent sound with powerful vocals, ripping solos, and pocket grooves.   Check out a video of the band performing their Tango arrangement of “Besame Mucho.”

I know this is different from your typical article here at the Beat-Play Experiment, but we aim to cover a variety of genres, and this band has talent that shouldn’t go unheard.  There are a lot of bands like Cabal that don’t get much credit for their performances just because their music isn’t very popular in our current culture.  However, I think a lot of people could appreciate it.  Cabal consists of Ari McManus on vocals, Nicolaas Kraster on guitar, Christopher Austin on percussion, Jon McLaughlin on guitar, and Daniel Brock on bass.  If you’re ever in Sarasota, FL, be sure to see if this band is playing at a local spot.  Ari is a fantastic performer and creates a sensitive and fun vibe on stage.  They create a performance and atmosphere that you don’t want to miss!