I was feeling a bit nostalgic today.  I looked back on a couple old blogs I have written and I was reading the other awesome stuff on this site when it finally hit me.  There is NOT ENOUGH METAL on this blog!  Now I am not a metal-head by any means, but who doesn’t like to turn it to 11 and destroy shit?  There’s only one metal band in my opinion that continues to embody the spirit of what Beatplay is all about.  They are called Anvil and they have just dropped a gem called “Juggernaut of Justice.”  Do me and your neighbors a favor and TURN. IT. UP.

Turn It Up – Anvil

Anvil has come back from Metal oblivion (although with 17 full length releases I believe they have never gone away) with an amazing documentary released last year covering all things Anvil and the difficulties of relentless touring and the ideas of “what could have been” taunting a band still trying to make it huge after 20+ years and being considered one of the best in the business with out the cash to show for it.  Anvil is one of the originals, simple as that.

They have been playing fast, loud and crazy music for decades.  This most recent release dominates.  It’s non stop and in your face.

It’s hard to review this record.  Problem #1: my hands literally won’t stop playing air guitar and air drums.  Problem #2:  I just threw my desk across my apartment and my computer was on top of it.  Problem #3:  My elderly (expletive) of a neighbor just came up and told me to turn it down to which I said nothing and awkwardly/ slowly closed the door in her wrinkled face.  All great problems to have and my luckily indestructible computer survived so I can continue.  But first…

Hell has broken loose.  It’s time to stand up and give these guys the respect the have deserved for years.  They have great lyrics and great hooks. 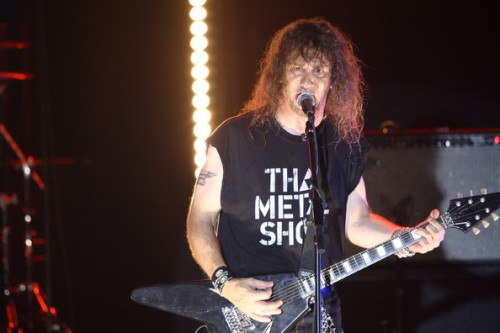 Lips is the lead singer/ guitar player.  His voice is like razor blades ripping through a wall of guitar and drums.  This band embodies metal.  They live it.  From the start of this record, title track “Juggernaut of Justice” though the final punch in the face “Tonight is Coming” Anvil just doesn’t stop.  ALL the songs are heavy.  ALL the songs are fast.  ALL of my brain cells have turned to mush.  I feel bad I wasn’t a fan/ didn’t know about this band earlier in my life.  Granted they have been around since before I was a fetus.  Who knows?  I may have just become a metal-head from the start.  Here’s the last track from “Juggernaut of Justice.”

Anvil currently has a couple US dates on their TOUR PAGE and are touring heavily in Europe.  “Juggernaut of Justice” was released back in May so go buy it right now.  It was recorded not to far from my house at Dave Grohl’s Studio up in Northridge, CA, which makes it even cooler in my book.  So throw the devil horns up and repeat after me.  Long Live Metal but most of all  LONG LIVE ANVIL.