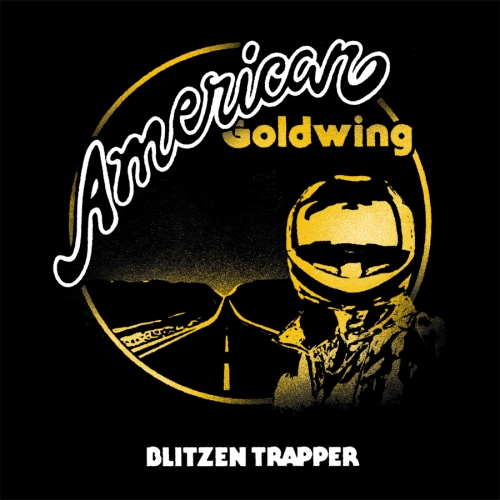 I want a porch.  I want a friggin’ porch so bad.  If I had my way I would move out of my Hollywood apartment away from my homeless neighbors who live on the stoop and the drunk assholes ready to kill someone over a double double from In and Out real fast.  I want a porch.  I want to sit on it and I want to listen to music and relax and drink a lot of beer without a care in the world.  I would have massive speakers and a rocking chair.  That to me at the moment is “the life”.  With Blitzen Trapper as my band of choice and their newest record “American Goldwing” as the soundtrack to my laid back afternoon I think I’m on to something here.

Indie rock, folk rock, southern rock, call it what you will Blitzen Trapper is a rock band.  They call Portland, Oregon home and have been touring heavily for the last few years.  They just released “American Goldwing.”  It’s one part rock and roll guitar laden, drum heavy grooves and one part distinct cool vocals with a southern twist.  Blitzen Trapper have created a sound all their own and I’m sold 100% on what they are selling.  Next track is called “Fletcher” which is one of my favortie tracks on the record.

After releasing Furr in 2008 Blitzen Trapper fell onto my radar.  After seeing them at Coachella Music and Arts Fest later that year (or in 09, I can’t remember) I couldn’t get them out of my head.  I have been following them on and off since then.  They released an awesome record called “Destroyer of The Void” in 2010 and now American Goldwing is just solidifying what I saw years ago.  These guys are tight and have honed this music and are perfecting it.

Despite being from Portland Blitzen Trapper has a little bit of a southern twang to them and then they just kick you right in the junk with a tune like Your Crying Eyes.  I think thats what I like most about these guys.  They have that southern influence that eases you into the music with familiarity and then they turn up the volume.

The band currently has six members with Eric Early on guitar and vocals with Brian Adrian Koch and Marty Marquis on drums and vocals and guitar and keyboards respectively.  The vocal duties are supported Erik Menteer on Guitar and Keyboards, Michael VanPelt on bass.

Girl In A Coat – Blitzen Trapper

Blitzen Trapper is currently on tour.  Lucky for me they are wrapping up their tour on November 17th at the Music Box in Hollywood.  Tour dates page is HERE.  Their new album “American Goldwing” is available anywhere where people care about good music, so basically the internet and Amoeba Music on Sunset Blvd.  Here are a couple final tracks from “American Goldwing.”  One rockin’ and the last track which is not so rockin’ but a great way to end the record.  Check these guys out when they are in your town.  In fact go out of your way by hours and hundreds of miles to see these dudes.  It’s worth it.