With the increasingly easy functionality of Google’s Chrome web browser it is becoming a very popular tool on most computers for internet usage. I’ve currently been using Chrome as my main internet browser but have had some problems with certain site’s layouts. Chrome’s intricate code restrictions have been leaving some site’s buttons covered by photots or videos that would have normally laid out in a different area on the page.

Now I understand if someone running a blog out of their home, doing their own coding, with very little background on the development process wouldn’t really be too concerned with an issue like this. Recently I have been going through all of our artists on our Music Without Labels site and going through all their content which in most cases happens to be MySpace. Using Chrome, I’ve come to realize that MySpace is one of these sites being restricted by a faulty code that Google’s browser refuses to accept, causing the header photo of each band to cover their music player. Now wait a minute!!! You would think by now a company like MySpace would have figured this out.

New Beat-Play About us Vid!

He’s got a bunch of them. Check out the similar videos on Youtube, or check out his blog: http://www.pogomix.net/blog

Evelyn Glennie: How to listen to music with your whole body

Sick Site for Tips on how to be a better Dance DJ:

One of the great revelations of 20th century science is that all existence can be broken down into simple wave functions. Every photon, energy emission, and elementary particle rings with its own unique wave signature. When we see a color, we are actually seeing a distinct frequency of visible light. When we hear a sound, our eardrums are actually being vibrated by subtle waves in the air molecules around us. Even the neurochemical processes of human consciousness  our very thoughts  ring with their own distinct wave patterns.

By studying the way that waves interact with other waves, researchers have found that even low-powered oscillations can have enormous effects on standing waves, physical structures, and even the human brain. The principle which describes this particular wavelength interaction is known as resonance. When you resonate with something, you are emitting a wave signature which is “in sync” with it. By applying a constant resonant frequency to a standing wave, you can intensify, reinforce, and prolong the standing frequency of that wave. Researchers posit that by applying these concepts of resonance to waves emitted by the brain, it is possible to induce altered brain states. These current methods of “brainwave entrainment” are based on discoveries made by the 19th century inventor Nikola Tesla  the electrical pioneer who developed the alternating current system of electricity that is currently in use all over the world.

Tesla first realized the massive potential of resonant waves in 1898 when he performed a simple experiment with an electromechanical oscillator the size of an alarm clock. He attached the device to an iron pillar that ran down through the center of his lab into the foundation of his building. His plan was to let it simply tap away until he could produce a significant vibration in the pillar. However, Tesla was unaware that the vibrations from the oscillator were being conducted through the iron pillar down into the substructure of the city. Just as earthquakes are normally the strongest at a short distance from their epicenter, nearby buildings shook and windows shattered while Tesla’s lab remained unaffected. Without rapid police intervention, Tesla may have let the oscillator run all night as buildings crumbled around him.

“The principle cannot fail,” Tesla would say. He understood that a steady frequency of tiny waves would eventually create enormous ripples if they were timed just right. What Tesla demonstrated was a principle of resonance known as entrainment – the ability of a frequency to cause a less powerful frequency to fall into rhythm simply by placing the two frequency emitters in close proximity. In other words, if you take an electrical oscillator with a power rating of 10 watts that is oscillating at a frequency of 1000 cycles per second (cps), and place it next to an oscillator with a power rating of 1000 watts vibrating at a frequency of 5000 cps, eventually the slower oscillator will be entrained to vibrate at 5000 cps because of the more powerful electromagnetic field created by the 1000 watt oscillator.

Recent research regarding the mind-altering possibilities of Tesla’s entrainment principle have been undertaken by Robert Monroe, the founder of The Monroe Institute in Faber, Virginia. A student of engineering and human physiology, Monroe’s interest in human consciousness began in 1956 when he set up a small research and development program in his New York based radio company. The research was initially designed to determine the feasibility of learning during sleep, but in 1958, an astonishing result emerged.

By experimenting with the effects of sonic frequencies on the brain, Monroe successfully isolated a little-known state of awareness which was totally separated from the physical body. The research team called it an Out-of-Body Experience or OBE  a term which has since become a generic description for many unexplainable mind states. The sonic principle he was using was already known to electronic engineers as binaural beat frequency modulation  a key concept used in all radio receivers today. However, it was Monroe who took this idea from the field of radio-electronics and applied it to bioelectronics. He called his discovery Hemispherical Synchronization, or HemiSync for short.

To achieve these novel mind-states, Monroe recorded two channels of audio data using a stereo tape recorder. On one channel he recorded a frequency of 200 cps, and on the other channel he recorded a frequency of 208 cps. When he played the recording back through a pair of stereo headphones, what Monroe discovered was that while one ear heard the 200 cps tone, and the other ear heard the 208 tone, the brain interpreted the tones as an eight cps frequency, and began to entrain itself to that frequency. In other words, the brain could only distinguish the eight cps difference, and this frequency was powerful enough to entrain brainwaves.

Get Binaural “Doses”  at I-Doser: 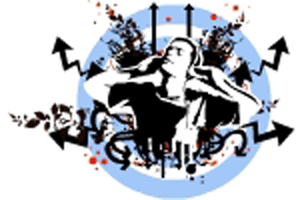 Kanye West emailed Zach asking if he could do a music video of “Can’t Tell Me Nothin” so they filmed this vid on Zach’s farm out in North Carolina for 3 days.